Luke Frees – Most of the Time

Luke Frees has just released his latest double single Most of the Time and Trauma Bound, cataloguing his reflections on breakups and the sense of loss that follows. His musical explorations expand eternally into landscapes of human emotions.

Most of the Time and Trauma Bound is your latest double single! It’s absolutely beautiful. What are some of the themes that you sought to cover with these tracks?

Thank you so much! I wrote these songs when I was just going through a breakup, and the a-side, Most Of The Time, was my way of making sense of a very specific feeling I had about forgetting memories and the little inside jokes we’d shared, while the b-side was more of a soundscape exploration that tried to pinpoint that emotion of loss without using words.

And, do the two tracks connect to each other and collectively bring out these themes? If yes, what are some of the elements that you used to bridge the tracks?

Both of these tracks are related to each other, but in a kind of paradoxical way. The a-side is a literal account of something happening during a breakup, while the b-side is trying to convey a similar emotion in a more figurative sense. Musically, they don’t actually share a lot of similarities—the a-side is full of mournful violin and Americana-style acoustic guitars, and the b-side is ambient and influenced by Berlin-era Bowie—but they carry the same emotional undertones.

Frees uses layered melodies to manifest a magical musical depth that we can’t help but drip into. As we percolate through this continuum of weaving violins and emotive guitar acoustics, the stories in the lyrics craft a cinematic experience. The artist is a storytelling musician with a penchant for words that roam through the melancholic halls of melodies.

You’ve released quite a bit of music this year! 6 songs including this double single! What are some of the musical concepts and styles that you found yourself constantly gravitating to?

Yes! I started the year with a song-a-week project (that I ended up bailing on in mid-July), but it left me with at least 20 or so songs that I’m revising and editing. The concepts and styles that I come back to are often a by-product of my writing style—I usually write lyrics on a typewriter and go through a lot of drafts until I’m sure I’m saying what I want to say as clearly as I mean to—so that usually lends itself to lyrically dense narrative driven songs. One of my ideas with this series of double singles is to make the b-sides more spontaneous and experimental, in an effort to push myself out of that comfort zone a little bit.

What would you want your listeners to take away from this double single?

I’d love for my listeners to be able to connect with the emotions in these songs. And when listening to the lyrics of Most Of The Time, maybe even connecting with that sinking feeling that you won’t be able to hold onto all those memories forever. Even if you can’t relate to the specific circumstances, if people just relate to how that general feeling of nostalgia and loss, I did what I wanted to do with these songs.

The acoustic bliss created by ringing violin melodies resonates with a deep loneliness that is incredibly heartbreaking. And the violin solos make for a magnificent display as it spirals with love and loss. Its torrential flow beautifully edges the line between dissonance and euphony with emotional grace. The musical scene that the artist erects and harvests is difficult to recover from. Its pain empathizes with ours, fills the cavity of loss and holds our hand in our grief.

How would you describe your musical journey beginning from After the Rain and The Cotones, till now?

That’s a great question. I think After The Rain was a great test to see if I could actually do it—it was really before The Cotones had gotten the ball rolling, so it was a great place for me to try out different songwriting styles and ideas and find my voice.

With The Cotones, I had so much fun working and writing songs with other people. I was the main lyricist of the group, but we all collaborated musically and the tension and push and pull between all of our various influences was what I think made that a beautiful collaboration for me.

When The Cotones disbanded, I realized I had to find that tension of influences within myself, since I didn’t have other people to lean on as much anymore. So that’s what I was trying to do with Point Of You and what I’m continuing to do with these singles coming up. I think the greatest artists are the ones that are a mosaic of their influences, and as a songwriter, drawing from as many colorful and different influences as possible is the best way to find a truly original voice.

What can we look forward to, music-wise, in the near future?

I’m staying on this single-a-month train as long as I can! Each single has an a-side and a b-side (December’s is already mixed and mastered and I can’t wait to share that one too!).

Listen to Most Of The Time by Luke Frees here – 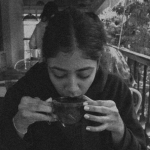